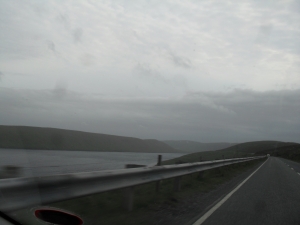 Through a glacial, U-shaped valley (probably).

Today I traveled to the northernmost part of the UK: the island of Unst at the top of the Shetland Isles.  Despite having lived in Shetland my whole life I don’t recall ever visiting Unst, though apparently I had been before when I was really young.  Getting to Unst is a bit of a stretch; tens of miles of road over the most beautiful, desolate scenery you can find and then two surprisingly comfortable ferries.  It’s a journey which proudly displays the variety of Shetland’s topography and human habitation.  We traveled through hills long ago ravaged by glaciers and watched as pollutant horrors burned on the horizon at the Sullom Voe oil terminal.  Many times, particularly through the island of Yell, it appeared that human civilisation had been left behind completely, so sparse is the landscape. 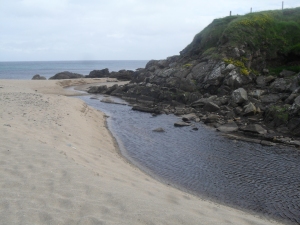 The Arctic beckons in the north.

Our first stop was the most northern beach in the UK, Skaw Beach.  After passing one of those boat-roof huts tourists seem to rave about, we explored the beach.  The river’s neat path carved into the sand impressed a respect for natural processes – aided by the fact I’m currently reading about Lovelock’s Gaia theory.  Our planet is amazing.  Next was a lovely building which used to have a purpose for the former RAF base, where I drank coffee and ate chocolate cake.

While I’m raving about geography, the geology of Unst is incredible.  I’m not greatly informed about it but I know the island is comprised predominantly of two different kinds of rock.  It shows.  Half of the island is like most of Shetland; moorland of grass or heather, with the occasional rocky outcrop of glacial till.  The other half, however, was a geographical delight.  It was as if the sky had opened up and let loose a barrage of rocks.  Presumably this rock is weaker and was therefore further pulverised by glaciers in the last Ice Age than the other side of the island, though that’s just me guessing. 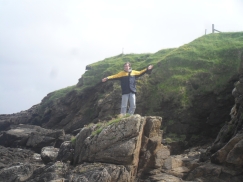 Another fascinating stop was the Muness Castle.  While not as famous nor as large as Scalloway Castle, it had its own charm.  It is very hard to visualise an open, drafty upper floor as once having been the base of powerful comfort.  How soon things decay.  Will our own structures, so seemingly stable today, collapse within another 500 years?

When you live somewhere, you forget how beautiful it really is.  I’m eager to leave Shetland to move on to new things but I am glad to have been brought up in such a great place.

Also, this has to be the best bus-shelter in the country: