Just realised I forgot to post my regular chart of the year!  As regular readers will know, I give every day of the year a specific grade, then take each month’s average to chart the ebb and flow of my life across the year.  This is the chart 2014 made: 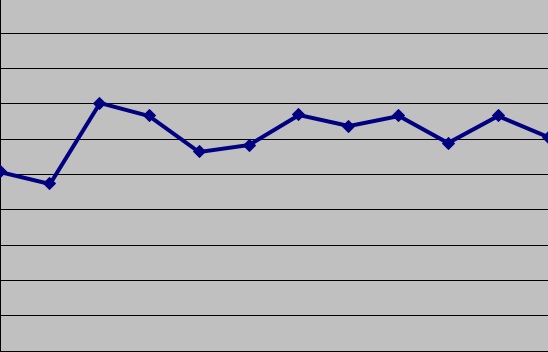 It’s pretty much as I expected.  My Dad’s death in mid January explains the downward curve at the beginning, with February being the first month in negative figures since 2011, while May as ever proved unenjoyable for students everywhere.  The latter half of the year was fairly steady though noticeably a bit below where previous years have been.

Continuing a practice I established at the end of 2012, here is a chart showing the highs and lows of 2013 for my life!  I created it by giving each day a grade throughout the year and then calculating an average for each month.

Compared to last year this was a real rollercoaster.  Crests appear during February and May, both exam months and both for different reasons – February was extremely stressful while May was extremely boring.  Then a spike in June, as I had fun rehearsing for and performing an awesome play, before falling as I had a somewhat uneventful Summer.  It peaked again significantly when I started university, before becoming quite crazy indeed – I might write a future post explaining these last few months sometime.  I have to say, I prefer it when the chart is a straight, relatively high-up line.  Here’s hoping 2014 is less dramatic!

There are two pretty big anniversaries covered today, both from a year ago.  The first, which is probably of most relevance to readers, is that this blog is now a year old!  365 days, 220 posts, 10,548 views and 107 followers; it’s not famous yet by any means but has gone much further than I ever expected.  The blog is continuing to go through an unfortunate slump in activity as I continue to get to grips with university (my timekeeping seriously lacks something to be desired) yet I still seem to be getting views.  Views don’t equate to quality, of course, but it’s humbling to think people are even looking at the blog on a daily basis.

Although posts may be less frequent, I hope to return to posting about topics which interest me and engage further with the world community of bloggers.  Posts I currently have in mind include ‘What is Anthropology?’ based on my less than favourable impression of this bizarre subject, a look at the ages of world leaders, a fresher’s perspective on career prospects, a review of 2013 at New Year and intensive coverage of voting events ranging from by-elections, the European Parliament elections in May and the exciting Scottish independence referendum in September.  It’s a big year – watch this space!

The other anniversary marks a year of vegetarianism.  Despite the stray gelatine and one unfortunate incident where I tucked into half a chicken pie before thinking, “this doesn’t taste much like soya…” it’s been a remarkable success!  I charted my progress here and here, but even then I never expected to last so long.  “I could stop tomorrow,” I wrote back in December, while in January I admitted “I still believe I’ll eat meat again one day.”  The latter remains entirely possible, of course, although I find it difficult to imagine how it would occur.

So here’s to another productive, meat-free year!  I’ll see you next November 18th.

2013: Welcome.  I hope you do a better job than your predecessor.

Below are two lists.  One is a list of books I’ve read this year, and the second is the same list but reorganised in my order of enjoyment.  Some people are impressed when I tell them I’ve read over 30 books this year but I don’t really think it’s that much – just 2 and a half books per month, which isn’t really all that much overall reading time.  I’m hoping to achieve more next year!