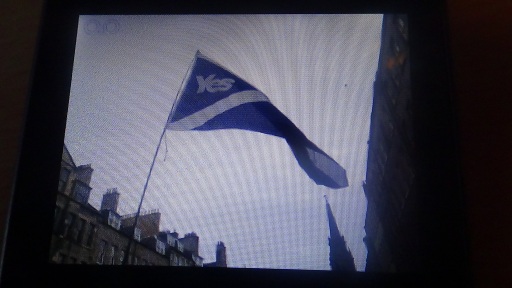 As I mark two weeks of living in Edinburgh I finally have something to  post!  I’m planning to write a summary of my ever-growing experiences at some point, but as I walked through the bustling crowd of today’s independence march I knew this post would have to take priority.  Also, I apologise for the quality of the pictures – I only had my phone with me and I later realised that I left my USB connector back at Shetland, so I had to take second photos with my other camera.  Not the most efficient method…

I was only able to briefly witness the initial gathering before the march to Calton Hill, which seems to have become a focal point for Scottish nationalism, as I was due to attend an ‘activism training day’ (I love Edinburgh).  Even so, with the march in a semi-formed state, this was still the most significant political event I have ever witnessed.  Flags were waved, some in frantic excitement, others rippling gently in the wind; whistles blew all round, often by children too young to understand the politics but clearly enjoying the carnival atmosphere; and bagpipes filled the air.  I once wrote about a fictional demonstration – which is, admittedly, a completely different context to here – and I’m glad I at least got the tone right.  Such joy, hope; visions and dreams were palpable through the crowd.  Whether these are justified is a different matter, yet almost didn’t seem important at that moment.  This march created an idyllic vision; cold reality can come later. 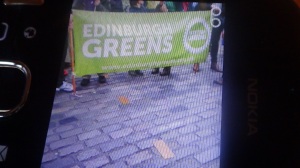 I was also struck by the vast variety of groups coalescing into this unlikely alliance.  I was most excited to see the Scottish Green Party who had a section in the crowd, though I was too shy to say hello.  In addition I came across the Scottish National Party, the ‘Radical Independence’ group, the Socialist Worker newspaper, the Scottish Socialist Party and even a ‘Christians for

independence group’.  Some single-issue organisations were there too, including anti-Trident pressure groups.  I think I even saw some Catalan flags, perhaps as a bid for pan-European solidarity.  Yes, a quick Google search tells me this was the Estelada, a flag used by Catalan nationalists.  I wonder if Saltires have even flown in Barcelona, then?

What is most impressive about my experience of the march is how peaceful and ordered it was.  This feels that it should go without saying, yet my studies of history indicate time and time again this isn’t the case.  For a movement so at odds with the interests of the ruling elite to be granted such freedom must be virtually unprecedented in the majority of human history.  There was a notable police presence* but even this seemed relatively relaxed, their prime concern being to prevent overcrowding.  There wasn’t even a hint of violent tension, which again would have been unimaginable for most comparable political movements in history.

I continue to be impressed by the optimistic vision advocated by the pro-independence cause.  Whether there’s reason to be optimistic is up for debate, but I can’t imagine anywhere near a similar atmosphere at a unionist march (do these even occur?).  I wouldn’t say this brief brush has changed my view of the debate but it has made it seem all the more real and, certainly, all the more exciting.  I am thrilled to be spending the next year here at a time of such debate and political activity. 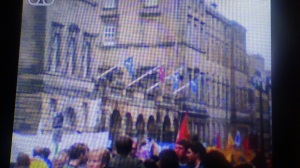 *I’m aware of section 76 of the Counter Terrorism Act 2008, which brings into doubt the legality of photographing police officers.  Since I’m neither directly or indirectly helping terrorists by the publication of these photographs I know I’m acting perfectly within the law, but it’s unfortunate we must worry about such things in the first place.