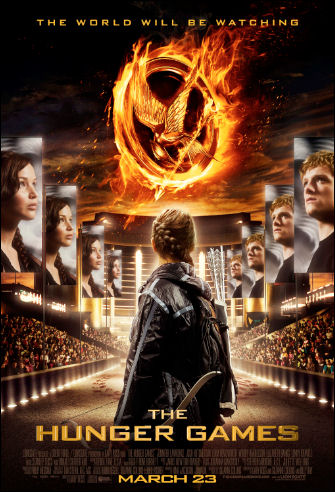 I’ve just recently been re-watching this film before and, my word, it’s good.  Adapted from the first book of Suzanne Collins’ hit trilogy (which dominated my list of favourite books read in 2012, taking the 2nd, 3rd and 6th places), it’s been a box-office hit, becoming the 59th highest grossing film of all time* and has the 9th highest earnings from the opening day in North America.  It was directed by Gary Ross, and produced by Lionsgate films.

Perhaps the most obvious reason for the film’s brilliance is its writing.  Every now and then a story comes along which entranced the imagination of the young and old alike; The Hunger Games achieved this with most success since, I would argue, Harry Potter.  The source material is fantastic, featuring an engaging, suspenseful plot with well-developed, realistic characters.  It’s full of detailed, ingeniously paced action scenes which are easy to be translated into film, but also complimented with substantial themes and a message that’s relevant today.  With such quality of a book to go on, it would have taken a lot for the film to fail.  I was particularly impressed by the dialogue: every line felt breathed into life by an actual person, rather than the scripted sequences common in other films.  Such heavily ‘scripted’ dialogue can compliment the film, as is the case with the Harry Potter films, but here the rawness of the dialogue compliments the gritty tone Ross went for.

Of course the best dialogue in the world couldn’t succeed if the acting talent is weak, but fortunately the film excels in this department also.  The part of Katniss needed to be perfect to truly sell the film and fortunately Jennifer Lawrence delivered on the front.  She made Katniss’ fear, her love, her hope and her determination believable.  One of many examples was a sequence on the train to the Capitol after the reaping.  I imagined the character to be plainer and less likeable but Lawrence’s portrayal stands up well to my pre-conceived ideas.  She had no dialogue yet managed to convey every emotion and thought Katniss experienced.  Josh Hutcherson portrays the charismatic Peeta, and of all characters is just how I imagined the part to be played; understated but believable.  Woody Harrelson is great as the drunken mess that is Haymitch but, like the character, can effortlessly switch to being cunning and sincere.  Elizabeth Banks, Stanley Tucci and Liam Hemsworth all ‘get’ the characters of Effie, Caesar and Gale, too.  We didn’t see much of Donald Sutherland as the antagonist President Snow, but he brings such power to the role that I look forward to seeing in future films.

A lot of people have criticised Ross’ direction of looking cheap and having an irritating fixation on handheld, shaky camera shots.  I shared these thoughts initially but, upon rewatching, have realised what Ross was trying to do.  It’s supposed to look cheap, raw, and real.  He saw that the book is entirely driven by the perspective of its narrator and sought to emulate that narration in the film.  To have created a slick, beautiful world would have lost the point.  That said, every shot slots in perfectly into the film and exists for a reason; each movement is calculated, deliberate.  The pacing is also fantastic – even knowing what happens I can’t help but become dissolved into the screen, reacting with every emotion Katniss experiences.  I feel her fear, her jubilation, her suffering.  My one criticism is that the film devotes a bit too much time to the first half and, arguably, comes close to glorifying features like Katniss’ costumes, Capitol glamour, etc.  It’s not so much that the first half dragged but that the second felt rushed.  Rue and Katniss’ relationship in particular just glossed by, depleting (though certainly not ruining) the impact her eventual death had.

The music, too, is divine.  From the haunting vocal track in district 12 to the majestic Panem anthem, it seamlessly compliments the film and has an individual identity.  James Newton Howard has definitely planted himself on my list of favourite film composers.

Overall, The Hunger Games is an utterly brilliant film worthy of high praise indeed.  I await with excitement the next film in the franchise, Catching Fire.