Romeo and Juliet, published in 1597, is arguably the most famous of Shakespeare’s plays.  It has definitely been the one I’ve been most aware of since childhood, though that might be due the fact our school got us to do a production of it when I was 8 – which was very fun indeed!  I played Paris and relished the death scene.  Probably the best role I’ve ever had in a play, actually.  But that’s digressing.  I remember thinking at the time I wanted to read the ‘original book’, but was put off the idea when I found out it originated from a 400 year old play.  Now, 9 years later, I decided to finally read it.  Because of its immense popularity and widely renowned nature, this is a hard play to discuss objectively.  I knew the story off by heart before reading it so that will also have affected my response. 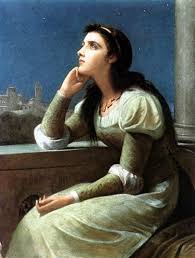 I think my main reaction was shock towards the plot.  I’d heard beforehand that Juliet is far younger than Romeo and that their relationship only spanned 3 days, but I had no idea just how distastefully this would come across even in the writing itself.  There’s a whole spiel about Juliet being ‘not yet 14’ – it’s never said how old Romeo is but we can presume he is older than 13, and Paris is probably around the same age.  Perhaps it’s just me, but I find it quite creepy that all these men should be chasing after a girl so young.  I could perhaps just forgive this, except the timescale of the play is so ridiculously played out:  Romeo and Juliet meet at a party he’s crashed, and within a page they’re tasting one another’s saliva.  That’s not love, that’s a hook-up at a party.  I can only presume they’re both drunk (actually, that might explain the entire play).  The fact that their first conversation has the form of a sonnet is a nice touch, but alone is not enough.  The next day they are married because, you know, they’re in love.  Like the people who go to Las Vegas for a party and wake up the next day married.  I had a similar problem with Les Misérables.  Thing is, I highly doubt Romeo actually loves Juliet.  To begin with he’s sulking over this girl called Rosaline, partly because she doesn’t love him but the main focus seems to be on her insistence to ‘remain chaste’.  Suddenly Romeo’s intentions become a bit clearer.  Friar Lawrence gets is right on the mark when he says:

“Holy Saint Francis, what a change is here!
Is Rosaline, whom thou didst love so dear,
So soon forsaken?  Young men’s love, then, lies
Not truly in their hearts, but in their eyes.”

This might indicate that even Shakespeare disapproves of their relationship.  Is Romeo and Juliet supposed to purport the same idea as his Sonnet 130; to make fun of traditional relationships?  The play does begin as a comedy, after all, only then collapsing into a tragedy.  Was Shakespeare having a laugh?  If that is his intention, he has certainly failed!  Romeo and Juliet has somehow, perversely, become the archetypal love story of “star-cross’d lovers”.  Though I would prefer the alternative of it being a ‘Great Hormone Story’, personally.

I don’t mean to sound overly critical; there were other elements I enjoyed.  Most of all, of course, was Shakespeare’s masterful use of language.  This, again, was held back by the poor plotting of the romance – beautifully written dialogue about love makes the situation even worse, in fact – but the language can be appreciated in isolation as lyrical and deeply poetic.  No examples spring instantly to mind, though again I find myself impressed by just how many modern phrases Shakespeare coined.

Romeo and Juliet does beg a question, for me, on the relationship between language and plot.  Some ‘literary elites’ may argue that true value is found in the skillful and original use of language, but I’m very much on the side of having a detailed, convincing plot, even if this means sacrificing the language.  Which is why I prefer the perhaps sometimes blandly-written Hunger Games or Harry Potter to Shakespeare, simply because they develop characters and stories to a much greater degree.  Other than being ‘star-cross’d lovers’, what development did Romeo and Juliet really have?  When they fall in love, I’m unconvinced.  When they commit suicide, I’m bored.  When Juliet says she would rather her parents die than Romeo be banished from Verona, I’m repulsed by the character.  The reader/audience is supposed to be on Juliet’s side, not cheering when she dies.

Sorry, ranting again.  The use of a chorus interested me.  Is it a technique Shakespeare uses a lot?  This is only my fourth of his plays (after Macbeth, Antony and Cleopatra, and Othello), but I’ve never seen it before.  I also felt the concept of feuding between the Montague and the Capulet families was initially well established, with the point becoming really well made of the futility of such a strife (even if I would argue Juliet’s death is more a reaction to her father’s patriarchal dominance, trying to force her into an arranged marriage, than the quarreling between families).

Overall, Romeo and Juliet is a great story that’s let down by lazy* storytelling.  Most of my criticisms do, I admit, come from applying a 21st century worldview onto a story written in the 16th.  Is it wrong to look at old plays from the perspective of modern values?  Well, I am a reader in the 21st century and if the play no longer feels convincing then it simply hasn’t stood the test of time.  That’s not to say there’s no value for Shakespeare in the modern world; many aspects of his plays remain hugely relevant today, which is a testament to his skill as a writer, and I don’t think his mastery of the English language will ever stop provoking awe.  I’m just afraid that, in this case, it didn’t work for me.

*Oh no, it’s a mortal sin to call The Bard lazy, isn’t it?  Well, while his use of language may be unrivaled, the plot is lazy.  The amount of times I’ve bitten my tongue to stop myself arguing with a teacher who kept finding excuses to cover up Shakespeare’s plot holes…  The unquestioning reverence our society holds Shakespeare in is wrong.

[I should probably point out that there is a lot of Shakespeare’s work I like.  Sonnet 130 is a really interesting subversion of poetic conventions at the time and most of Macbeth is a complete joy to read].